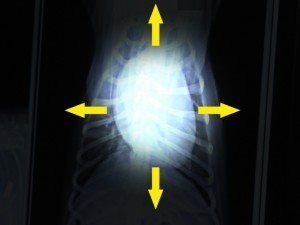 The heart functions as a pump to supply oxygenated and nutrient-rich blood to all of the organs and tissues of the body. When the heart becomes diseased and is less capable of doing its job, all systems in the body may begin to fail as a consequence. The term Congestive Heart Failure (CHF) is used to describe any disease process of the heart which causes an inadequacy to maintain the circulation of blood resulting in congestion and fluid accumulation in the tissues. Dilatative Cardiomyopathy (DCM) is a type of heart disease that causes CHF.

Dilatative Cardiomyopathy means disease of the heart muscle which results in dilation of the heart chambers. Dogs have four-chambered hearts just like people; the upper left and right chambers are called the atria and the lower two are called the ventricles. DCM can occur in any breed but it mainly affects large breed dogs which are often genetically predisposed.

In this form of heart disease, the heart muscle loses its ability to contract and pump blood out of the chambers. It can originate on either side of the heart, although left-sided DCM is most common. In this case, the left ventricle is unable to pump the same volume of blood out to the organs as the volume of blood returning from the lungs into the left atrium. The left chambers will dilate as the heart muscle wall becomes thin, stretched, and less efficient. Subsequently, congestion will occur in the lungs as a result of increased back-pressure. Coughing is a common symptom as a result.

In right-sided DCM, back-pressure occurs in the abdomen rather than the lungs, and dilation of the heart muscle occurs in the right heart chambers. The right side of the heart receives blood from the organs and pumps it to the lungs for re-oxygenation. The increased blood pressure in the abdominal vessels causes fluid to leak from the vessel walls into the abdominal cavity. Veterinarians refer to fluid accumulation in the abdomen as ascites. When a significant amount of fluid builds up, the diaphragm cannot expand into the abdomen, and respiratory difficulty can occur with no cough necessarily present.

Sometimes dilatative cardiomyopathy occurs on both sides of the heart simultaneously. In left or right-sided DCM, the cardiac silhouette will show enlargement on an x-ray. A heart murmur may be audible as the dilation of the chambers and increased back-pressure causes the heart valves to seat improperly and blood to “leak” in a reverse direction of flow. Heart murmurs are caused by turbulence in blood flow, but are not always present in DCM. Certain large breed dogs may also develop abnormal heart rhythms associated with DCM. Pulse deficits and misshapen EKG waves may be noted on examination by the veterinarian. In severe cases, syncope (fainting) may occur in dogs with advanced DCM who do not receive ample blood flow to the areas of the brain that maintain consciousness.

Unfortunately, there is no absolute cure for DCM. The treatment for dilatative cardiomyopathy of any type requires removal of fluid congestion in the lungs or abdominal ascites by using diuretic drugs like furosemide and spironolactone. Enhancement of heart muscle contractility and reduction of blood pressure is gained with the use of angiotensin-converting enzyme (ACE) inhibitors such as enalapril and benazepril and vasodilators like amlodipine and diltiazem. A positive inotropic drug called pimobendan is used in combination with diuretics and blood pressure medications to enhance blood delivery to the organs.

Taurine deficiency may cause dietary related DCM (as seen in pets fed improper diets). Taurine is added to all commercially prepared dog and cat food and is rarely the cause of DCM in house pets.

The prognosis for cases of primary dilatative cardiomyopathy greatly depends upon being recognized and treated early in the progression of the disease. Treatment for symptoms and consequences of congestive heart failure due to DCM can greatly improve quality of life as well as extend life-expectancy in most cases.