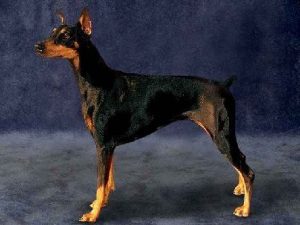 In the 1870′s, a German tax collector named Louis Dobermann wanted a dog to accompany him on his rounds.  He needed a dog as alert, protective, and intelligent as the German Shepherd Dog but with the grace and agility of a terrier.  The breed he created twenty years later was named after him.  He had achieved his goal.  By blending dogs such as the Rottweiler, German Pinscher, and Black and Tan Terrier he got a smart guard dog with a fearless nature.  The Doberman Pinscher made its debut in American show circles in 1921. Today, it is among the top twenty most popular breeds in the United States.