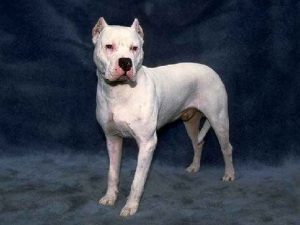 A recent South American creation, the Dogo Argentino was bred to hunt big cats in its homeland.  They have also proved effective in guarding cattle against poachers, both the two- and four-legged variety.  It is descended from an old fighting dog which originated in Spain.  Father of the breed, Dr. Antonio Martinez, reportedly added some Boxer blood to increase the dog’s tractability.  The Dogo’s notoriously fierce temperament has put it on the list of banned dogs in Britain. It is, however, legal to own them in the United States and they are becoming popular for guard work and probably illegal dog fighting.