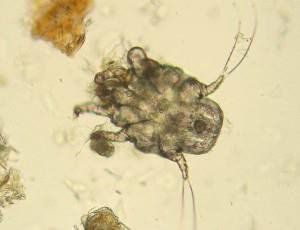 Ear mites (Otodectes cynotis) are tiny, almost microscopic, parasites that live in the ear canals of our pets. They are very contagious and nearly always found in both ears. Even though ear mites are a common cause of ear infection, they are often falsely blamed for other bacterial and fungal infections of the ears. They produce large amounts of reddish-black discharge from the ear that resembles coffee grounds. It is important to have any ear problem seen by a veterinarian before over-the-counter ear mite remedies are attempted without success. Ear mites are easy to diagnose, but they can be persistent if not treated properly. Be sure to tell your veterinarian about all animals in the household with which the pet may come into contact. They are not considered contagious to humans.

Ear mites appear as tiny white specks to the naked eye. An otoscope magnifies them to the point that they can be seen moving. Under the microscope, they are spider-like mites with eight legs. The adult males mate continually with deutonymphs, immature mites with no set gender. The deutonymph then molts into a male or female adult. The females will be egg-laden, and the males will seek mates. Eggs hatch in four days, and a six-legged larva emerges which molts into a protonymph and later a deutonymph. The entire bizarre life cycle lasts about three weeks. Adult ear mites live approximately two months on the host animal, and up to twelve weeks in the environment. Fleas may be able to carry eggs and mites from one animal to another, making direct contact unnecessary to transmit ear mites.

There are several treatment options for ear mites. Topical insecticide otic preparations that contain pyrethrin easily kill the mites and larvae but not the eggs. These products must be used for at least the three week life cycle to ensure that all hatching larvae are killed. Some veterinarians prefer a thirty day treatment.

Another treatment for ear mites is a one time treatment with a topical product containing ivermectin or milbemycin. Only about five percent of pets will require retreatment, and the products are very safe. Convenience is weighed against cost with these products when multiple animals in the household must be treated.

An injection of ivermectin can be given weekly for two to four weeks to kill ear mites. This is an extra-label use of the drug, meaning it is not specifically approved by the FDA for this use. It is a very effective treatment; however, certain breeds of dogs may be sensitive to ivermectin. Because it is injected, higher blood levels of the drug are achieved and reactions, while rare, may occur.

There are several “spot-on” topical monthly flea and tick preventives that are labeled for ear mite treatment available today as well. It is imperative that the product label says “safe for use on cats” if it is to be applied to a cat with ear mites.