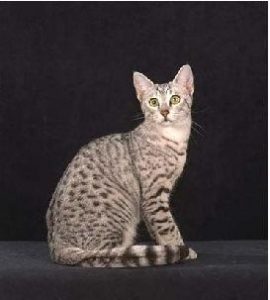 One of the oldest breeds of domestic felines dating back to 1400 B.C.  Drawings of spotted cats can be seen in the tombs of Egyptian pharaohs.  In 1956, three Egyptian Maus were brought to the United States by an exiled Russian princess and became the foundation for the breed.  Granted championship status in the Cat Fanciers’ Association (CFA) in 1977.