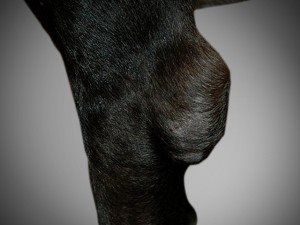 An elbow hygroma is a response to chronic trauma to the lateral aspect, or outside, of the canine elbow. It appears as a non-painful, fluid-filled mass, usually as a result of lying on a hard surface. The fluid is generally sterile unless the skin has been punctured; in which case, the hygroma may become infected with bacteria and will indeed be painful. In most cases, a sterile hygroma will resolve on its own after the repeated trauma is eliminated. Septic (infected) hygromas will require surgical drainage and antibiotic therapy.

The typical hygroma patient is a young, large breed dog that is kept on a concrete-floored kennel. Long hair serves to pad the boney prominence of the elbow from the hard surface, and older dogs will have developed thick callus pads on the elbow which usually helps to inhibit hygroma formation. The sterile hygroma is mainly an aesthetic concern, and rarely requires more than changing the resting surface. By providing soft, thick padding on which to lie, the hygroma will subside after about 2 to 4 weeks. Occasionally a thick padded bandage will be applied to help protect the elbow and reduce fluid formation. It is not recommended to drain a sterile hygroma by needle aspiration because of the risk of introducing bacteria. Bacterial infections in the joints can be extremely painful and difficult to treat.

The treatment for a septic hygroma is not so simple. The swelling must be surgically opened, irrigated with sterile flush and antiseptics, then Penrose drains or closed suction drains are placed into the cavity to prevent further fluid accumulation. Injectable or oral antibiotics and analgesics for pain will be given for several weeks until the wound heals. Once opened surgically, the hygroma will tend to drain for a week or so afterward. The elbow will be bandaged and the bandages will be changed daily until the drains are removed and healing is complete. An Elizabethan collar must be worn to prevent licking and chewing at the incision.

One serious complication of a septic hygroma is the possibility of ulceration or abscessation. As the bacteria proliferate, and the swelling becomes greater, the skin over the elbow may become devitalized. The tissue may necrose, or die, and slough leaving a draining infected open wound. Treatment may require debriding (trimming) the devitalized tissue, then suturing the wound with drains in place; or the defect may be large enough to require skin grafting or healing by second intention (granulating in over a long period of time). An abscessed hygroma may require several repeated surgeries, hydrotherapy, long-term antibiotic therapy, and numerous bandage changes before completely healing.