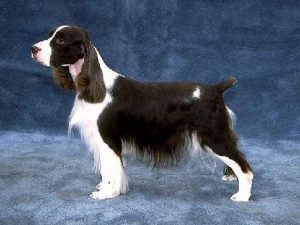 The English Springer is a member of the British family of spaniels.  These hunting dogs are used before the gun to spring or flush birds into the air.  Cockers and Springers were once found in the same litter.  The smaller ones were used for woodcock and became known as Cockers.  The larger ones became known as Springer or starter spaniels and eventually became a separate breed.  The versatility and hunting prowess of the English Springer makes it the spaniel of choice for hunters in the United States.  It was accepted into the American Kennel Club (AKC) in 1932.