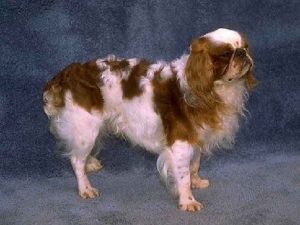 The early history of these little lap dogs is not clearly defined.  It is thought they originated in China and arrived in England via Europe.  For hundreds of years, they have been the pampered darlings of English royalty.  They have a lingering hunting instinct, which probably indicates that they were crossbred with small Cocker or Springer Spaniels over the years.  It is not known, however, if they were ever used for hunting purposes.  There are four varieties that are identical except for coloring.  One of the foundation breeds of the American Kennel Club (AKC).