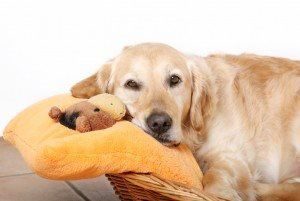 False pregnancy sometimes occurs after a normal heat cycle in the un-spayed female dog that has not actually conceived. It includes the behaviors and outward signs of pregnancy that are experienced by some dogs (and rarely cats) due to hormonal fluctuations associated with reproduction. The exact mechanisms involved in false pregnancy are not completely understood. While false pregnancy is generally not harmful to the pet, the problem for pet owners may be temperament changes, maternal behaviors involved in “nest building”, the “adoption” of inanimate objects like shoes and stuffed animals, and unexplained appetite changes or weight gain.

The reproductive (estrus) cycle of the dog differs from that of a female human in a couple of ways. Estrus occurs about every six to eight months beginning with proestrus, where the vulva swells, a bloody discharge is present, and the female dog attracts a mate. During estrus, the female accepts the male and an ovum (egg) is released from one of two ovaries through the fallopian tubes into the uterus. At this point, the discharge changes to straw-colored. If bred successfully, the egg will attach to the uterine wall once fertilized by the male’s sperm. Regardless of whether the female dog is bred however, the dog remains “hormonally pregnant” during diestrus for the approximate gestation period of 63-70 days.

During this time, the female dog’s mammary glands will enlarge and may produce milk in anticipation of a litter to be born. She may build a nest, which often includes shredding paper and fabric, hoarding a private area of the room, and adopting a “pup” in the form of a shoe, stuffed animal, or other available object. The dog may become protective of the object and territorial around the nest, leading to aggressive behavior unlike her normal personality. She may even appear pregnant with a distended abdomen.

False pregnancy is confirmed by ruling out a genuine pregnancy. A physical examination by the veterinarian along with a history of known breeding attempts and last heat cycle can identify whether the dog has become pregnant or not. An x-ray or ultrasound may be used to identify the skeletal structures of the fetuses if they are palpable within the uterine horns.