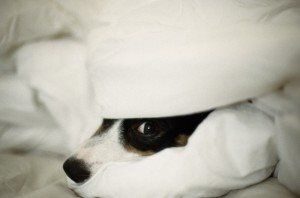 Dogs can develop fears of noises, people, and objects. Fearful behavior can escalate into inappropriate growling and snapping (fear biting), urinating or defecating in the house, or destructive behavior. The dog may injure itself while panicking during a storm. Dogs should be desensitized to their fears and phobias before the situation becomes problematic in the household. Lack of proper socialization can cause a dog to be afraid of people outside of the family. They may hide from, growl, or bite unfamiliar visitors and passersby. A common excuse for this unacceptable conduct is that the animal was abused before it was adopted by its owner. While this may be the case with some dogs, most fears of people stem from the fact the pet was not introduced to pleasant experiences with people at a young age. This behavior should be dealt with before fear biting occurs. Help from a behaviorist is absolutely necessary once fear related aggression begins.

Loud noises such as delivery trucks and thunder can cause a dog to become fearful. Consoling the pet during these situations can reinforce the behavior, and confinement to a crate does nothing to address the fear itself. Never reward inappropriate actions with treats and praise. Instead, reward good behavior such as responding to commands during the noises. A recording of the offending sounds can be made and played softly while the dog is praised and rewarded with play and treats. The problem in addressing noise phobias is that the sound itself may not be the only trigger causing fear. The dog must be desensitized to the entire situation, but starting with softer versions of the noises may be a good start. A consultation with a behavior specialist may prove beneficial, and a veterinarian may prescribe anti-anxiety medications to help during the behavior modification.

While abuse may or may not play a role, object-related phobias probably start as a result of a bad experience happening in the presence of the object. Rewarding appropriate behavior while desensitizing the dog is the best way to deal with this problem. Basic obedience training should be in place and practiced while exposing the pet slowly to the feared object.

It cannot be stressed enough that the earlier these fears are addressed, the more likely it is that the dog can be successfully rehabilitated. Behavior specialists can give an unbiased outside look at the causes of the dog’s anxieties and provide solutions that will help keep the household from being disrupted