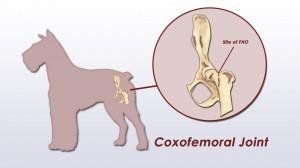 There are many injuries, diseases, and deformities that can affect the hip joints in dogs and cats. Pain and reduced mobility are likely symptoms regardless of whether the problem occurs acutely, like a traumatic fracture, or over time, like the arthritic changes seen with hip dysplasia. In some cases, a surgical procedure called a femoral head (and neck) ostectomy, FHO for short, may be an effective treatment option to provide pain relief and improved range of motion.

Specifically, the hip joint is a ball and socket type attachment between the rear leg and the pelvis. The femur (thigh bone) runs vertically through the hind leg and is topped with a neck that points toward the body. At the end of the neck is a smooth ball that fits snugly into a socket in the pelvis called the acetabulum.

During a femoral head ostectomy, the ball and neck portion of the femur are removed, and any irregularities remaining on the femur are removed. This requires disarticulation (separation) of the joint unless the hip is already severely dysplastic or traumatically separated. The muscles that support the limb attach below the neck of the femur and are not affected by an FHO surgery. The joint capsule tissue is then closed if possible, followed by the muscle and subcutaneous tissue. Finally, the skin is closed with sutures that will be removed in a couple of weeks. Usually, there is no need for bandaging; although, an e-collar is recommended to keep the pet from chewing at their sutures.

An FHO is sometimes referred to as a “salvage procedure”; so called because the bone and joint are not restored to their original form and function. Instead, a portion of bone is removed, and a “false” joint, or scar tissue pad, forms in place of the hip joint. The result is alleviation of pain and close to normal function of the limb. This procedure works best on cats and small to medium dogs, but has been performed on animals as large as horses. For large breed dogs, hip replacement is preferred over FHO, and the outcome is generally better.

This is one procedure where activity is not restricted afterward. The growth of the scar tissue pad that forms in place of the joint is dependent on the limb being used. Range of motion exercises should be performed as soon as the pet will tolerate them. These involve gentle flexion and extension of the entire leg in repetitions several times a day. Good pain control will help the pet begin using the limb within a couple of weeks of surgery. If all goes well, it will be difficult to visually discern which leg has received an FHO procedure after complete recovery.

Even though a femoral head ostectomy is sometimes called a salvage procedure, it is actually a very practical and effective remedy for many pets. It is the treatment of choice for Legg-Perthes Disease, a painful and crippling hip problem affecting many toy breeds that results from impaired blood supply to the head of the femur. An FHO can mean relief from chronic pain when conservative treatment has failed or alternative methods of surgical intervention are not possible.