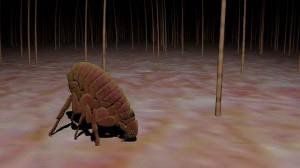 Fleas are the worldwide number one cause of allergic dermatitis in dogs and cats. Symptoms of flea allergy dermatitis (FAD) include scratching, chewing, licking, inflamed skin, and hair loss. Severe cases may lead to broken skin called hotspots, and granulomas – raised, edematous, oozing lesions that can cause permanent scarring. Being blood-sucking parasites, fleas can cause anemia if their numbers are great. Fleas can transmit disease to people and pets and can quickly infest a household and yard. The treatment for FAD always begins with removal of the fleas from the animal and its environment. Topical, oral, and injectable antihistamines and corticosteroids, as well as antibiotics for infected skin, may be prescribed to provide relief of symptoms.

Fleas are blood-sucking insect parasites that require an animal host to survive. Female fleas must continually feed during reproduction; therefore, they can consume 150 times their body weight in blood every day. During blood meals, the flea’s saliva is released into the animal’s skin to act as an anticoagulant. The saliva contains histamine-like compounds that are very irritating to the skin.

Flea allergy dermatitis is specifically caused by an allergic reaction to flea saliva. The allergy begins as a local contact allergy, but becomes systemic as the pet is exposed over time. This condition does not require a large number of fleas, only a repeated exposure. In fact, animals with flea allergy dermatitis may not have many fleas on them, usually because they ingest the fleas while licking and biting themselves. As the allergic reaction becomes more severe, redness and hair-loss will occur. Eventually, the skin will become thickened and hyper-pigmented from chronic self-trauma and allergic inflammation. Secondary infection and odor occurs when bacteria and yeast invade and colonize on the damaged skin.

In the past, the methods of removing fleas from the pet included bathing and dipping the animal in insecticides containing pyrethrins. While very effective, pyrethrins do absorb into the blood-stream through the skin and can be toxic to the liver and neurological system. Because animals with FAD may have broken and inflamed skin, they may absorb higher levels than healthy pets. Permethrin, a stronger synthetic insecticide, is extremely toxic to cats. Permethrin containing products are labeled, “for use on dogs only.” Newer topical and oral treatments to kill fleas are safer and fast-acting. Your veterinarian will prescribe the safest, most effective remedy for your pet.

Most animals with FAD will require medication to relieve itching. It is important to stop the self trauma that leads to infected skin. Antihistamines used include diphenhydramine and chlorpheniramine. They are very safe, and doses can be repeated every 8 hours as needed. Corticosteroids are used for more severe symptoms. Prednisolone and triamcinolone come in topical, injectable, and oral forms. Injectables, while very potent and often necessary, can not be removed from the body in the event of side effects.

Shampoos and rinses containing oatmeal and antiseptic ingredients may also be used to provide temporary relief from the symptoms of flea allergy dermatitis.

Regular use of flea preventives is the only way to avoid flea allergy dermatitis.