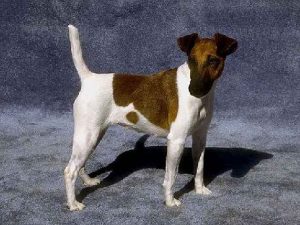 There are two varieties of Fox Terrier—smooth and the wire haired.  Until recently, the two coats were shown as varieties of a single breed.  The Smooth Fox Terrier predates the Wire Haired variety by about 20 years.  The old Black and Tan Wire Haired Terrier was liberally crossed with Smooth Fox Terriers.  This was done to get the predominately white color that hunters wanted to protect their dogs from savaging by hounds, which often got dark colored terriers confused with fox or other vermin.  The Fox Terrier became one of the most recognized dogs in the world because the British took it with them wherever they went.  Smooths were shown at the very first organized dogs shows.  In fact, some of those early shows were for Fox Terriers only.  The breed in both varieties were founding stock when the American Kennel Club (AKC) was formed.