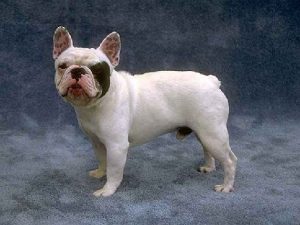 The history of the Gallic Bulldog is entwined with that of the English Bulldog.  There is considerable debate about whether the dog was a miniature version of the English Bulldog and was shipped off to France as an undesirable, or was developed on the European Continent and later brought to England.  At any rate, the Frenchie is without doubt a miniature version of its stouter Anglo Saxon cousin.  There are two rather significant differences beyond the obvious size one.  The Frenchie’s wide-set, bat ears are unique to it, and its skull is flat between the ears and domed as it comes down toward the nose.  In the larger Bulldog the ears are held in the tightly-curled, rose position and the skull must show no signs of a bulging dome.  The Frenchie was traditionally a woman’s pet.  It was shown in the United States in 1898 in the ballroom of the Waldorf Astoria Hotel in New York, the first time a dog show had been held in any place so grand.  It caused quite a sensation.