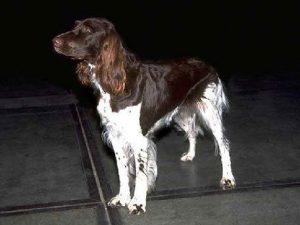 There are three types of German Pointer:  the Shorthaired, the Wirehaired and the Longhaired.  The first two are closely related and popular around the world.  The third, the German Longhaired Pointer, had a great deal more spaniel blood in its original makeup as an attempt to create a dog that would be better at water work than the other two pointers.  It is believed that the now extinct Old Water Spaniel and various spaniels from France were the foundation stock and later other blood was introduced, notably that of the Gordon Setter.  The German Longhaired Pointer is a handsome gun dog that can work feathered game on land and water.  He is slow and thorough in the field with an unremarkable nose, which may account for the fact that the breed is still relatively unknown outside of Germany.