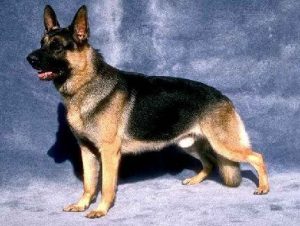 Although it has a long and distinguished line of sheep-working ancestors, the modern incarnation of the German Shepherd Dog begins in 1882 (the first time it was exhibited at a dog show).  From the moment it was first seen, the world knew it was looking at a super dog.  Championed by Herr von Stepanitz and rigorously controlled by the German Breed Club, the German Shepherd Dog came to full flower in the 20th century.  Concern that the dogs be of sound mind and body, culminated in the result that championships were only granted if both qualities were judged to be superior.   It is unparalleled as a working dog and companion.  It was the original Seeing Eye Guide, the standard by which other military and police dogs were judged, and a star of movies and television.   Originally smooth, wired and long-haired varieties were shown.  The wire was eliminated in preference to the other two varieties.  The smooth is the dog we know today, although a long haired one pops up from time to time.  The first German Shepherd Dog was registered in the United States in 1912.  To protect the dog from anti-German sentiment during the First World War, the Kennel Club dropped the “German” from its name.  It was restored in 1932, just in time for World War II.