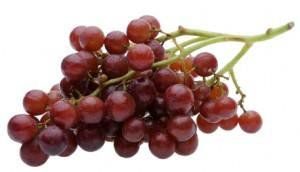 We all know we shouldn’t give “people food” to our pets. Quality pet food already contains all of the nutrients and calories they need to be healthy. Still, it’s very hard to deny those pitiful eyes begging for just a little morsel from the table. Many of the “harmless” little handouts we share with our pets are in the least unnecessary calories, and may complicate dietary sensitive chronic conditions like heart disease or pancreatitis. What we may not realize however, is that there are certain foods that are certainly healthy for people, but can be quite toxic to our pets. The most widely known food toxin is chocolate. Onions and garlic can also cause illness. In recent years, grapes and raisins have been implicated in food toxicities; some cases of which have caused serious harm or even death.

The responsible chemical toxin in grapes and raisins is unknown. It is speculated that mycotoxin, a fungal by-product, or pesticides might be to blame; however, no consistent evidence exists to prove a direct link. In cases of toxicity, there is no pattern of the variety or origin of the grape or raisin ingested; nor does it seem to depend on seed vs. seedless, skin-on or skin-less, et cetera. It is also difficult to assess how many grapes or raisins an animal can consume before developing a toxic reaction. Many pets may consume a significant quantity without any ill effect, and others become extremely sick or may die. Any ingestion of grapes or raisins should be considered an emergency and be brought to the attention of the veterinarian immediately.

The initial symptoms seen within several hours after grape or raisin ingestion include vomiting followed by diarrhea, lethargy, and increased thirst. From 24 hours to several days later, acute renal failure (kidney failure) may occur. Since the exact toxin is unknown, there is no known antidote available. And, because it is unpredictable how each animal will react to grape or raisin exposure, the best possible prognosis depends upon rapid and successful decontamination of the pet. If significant grape or raisin ingestion has occurred or is highly suspected, vomiting should be induced as soon as possible, followed by administration of activated charcoal to absorb the toxin.

The treatment beyond decontamination is renal (kidney) support with intravenous fluids. An IV catheter is placed, and fluids are administered in order to increase urine excretion of the toxin. Blood chemistry analysis will need to be assessed before, during, and after treatment to determine how much harm, if any, was done to the kidneys. Elevated blood-urea nitrogen, creatinine, phosphorous, and calcium levels are evidence of kidney damage.

Some animals may never have a reaction to grapes or raisins, but it is not worth the risk of permanent kidney damage or death to find out. Do not give these “people treats” to your pets, and keep them out of your pets’ reach to avoid accidental ingestion.