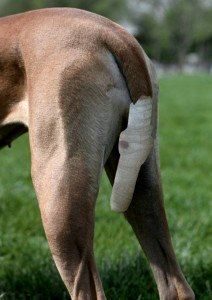 The term “Happy Tail” is a bit of a misnomer. It actually refers to an injury to the tail caused by exuberant wagging against a hard surface. Sometimes called “Kennel Tail”, a dog may wag so hard while in a confined area that the skin and blood vessels at the tip of the tail become ruptured when repeatedly struck against the wall or any vertical surface. These injuries can be very messy as blood is “wagged” all over the place. In fact, an owner may think that the dog has lost a life-threatening amount of blood although rarely is the volume significant. Still, this injury will probably require the veterinarian’s attention. It can be very difficult to stop the bleeding as the tail is constantly reinjured, and antibiotics should be started to prevent infection.

Most of the dogs susceptible to Happy Tail are large breed, short hair dogs. The reason that they are more prone to this type of injury is two-fold. First, the tail is larger and has more mass than smaller breed dogs. When the “happy” muscles get started wagging, that tail can become a dangerous weapon as owners of these dogs are already aware after being whacked in the shins and thighs a few times. There is a lot of momentum driving the delicate tip of the tail into a hard surface. Secondly, the short hair makes the tail more aerodynamic, allowing it to wag faster through the air. Dogs with skirted tails rarely have a problem with Happy Tail injuries.

Treating a Happy Tail injury starts with stopping the bleeding. Tails are difficult to bandage, and the extra padding necessary to absorb the blood and cushion subsequent blows will make the bandage heavy and prone to slippage. Cooling the wound with an ice pack will speed blood coagulation and clotting, but be careful to avoid frost bite injury from over-cooling the tissue. Any bandage applied must be able to breathe and should not strangulate the tail. Duct tape is a horrible choice for bandage tape because it is waterproof and will not stretch. Many veterinarians will cover the end of the tail with a prescription vial or syringe case that has holes drilled for ventilation. These are light weight and will protect the delicate tip from further injury.

Once the bleeding has stopped, and an adequate scab has formed, the wound must be cleaned of matted hair and debris. These types of wounds are difficult to keep clean, and bleeding often recurs afterward. Oral and topical antibiotics will help to prevent infection from becoming established.

Ultimately, many persistent Happy Tails will require moderate amputation. The flexible section of the tail is surgically removed to prevent the whipping action that causes the injury and delays healing. As a general rule, at least 2/3rds of the tail will be amputated if Happy Tail cannot be prevented.

The best solution is to avoid the injury in the first place. If possible, the dog should not be confined where the tail may be struck against a hard wall. During crate-training or kenneling, the crate should be large enough for comfort, but small enough to stop unimpeded tail wagging.

Avoid shaving a skirted tail, as the hair protects the tail from injury.