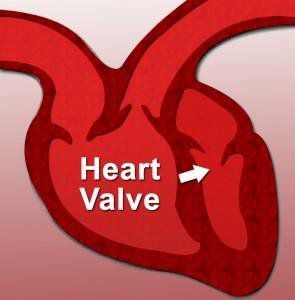 During a physical examination, the veterinarian will use a stethoscope to listen for abnormal sounds in the chest. A heart murmur is one such abnormality that is fairly common in dogs and somewhat rare in cats. A murmur is an additional “swishing” sound that accompanies the normal heart beat. While no cause for panic, this finding does warrant further investigation to ensure that the heart is healthy.

The dog and cat heart is similar to a human heart in that it utilizes four “passive one-way” valves to regulate the direction of blood flow. The valves are located at the entrances and exits of the two ventricles, the largest two of the four chambers of the heart. They are “one-way” valves, such that they open when blood flows in one direction, but are pushed closed if the blood tries to move in the opposite direction. The valves are “passive” because they do not open and close by any other mechanism besides the force of the blood flow.

Murmurs are classified as systolic or diastolic – the turbulence occurring after the first beat sound or after the second beat sound – and graded according to the intensity or volume of the turbulence. Furthermore, the location of the murmur, or the loudest point on the chest where the murmur can be ausculted (heard with a stethoscope), can also help predict which heart valve is malfunctioning. Other descriptions of murmurs can include the pitch, the shape (variation in intensity), and the quality of the turbulence.

Heart murmurs may be congenital or acquired. Congenital murmurs exist from birth (although they may not be observed until later) and are evidence of a heart defect that occurred during development. This type of murmur may not be related to the valves at all, and instead may be caused by a small hole between the chambers of the heart where turbulence occurs. When mild and asymptomatic, the murmur is considered innocent or benign, and is not attributable to a pathological (harmful) heart condition. Congenital murmurs should be monitored for changes and reevaluated as necessary.

Acquired murmurs most often occur as a result of underlying or developing disease. Valvular disease and congestive heart failure are relatively common in aging dogs, and a murmur may be the first subtle evidence detected. Anemia is an easy to miss reason for an acquired murmur. The veterinarian may request a cardiac workup including radiographs, EKG, blood-chemistry profile, or an echocardiogram to determine a course of action. Many mild murmurs found in otherwise asymptomatic animals will require no treatment other than observation. Heart disease diagnosed and managed early in its progression carries a much better prognosis than after symptoms begin.

Heart murmurs are rare in cats, and cats with even serious heart disease do not necessarily acquire a murmur. For this reason, a murmur detected in a cat should be evaluated aggressively. A silent killer called Hypertrophic Cardiomyopathy will occasionally reveal itself with a heart murmur; there is otherwise rarely any warning of its impending threat.

Many pets live long and normal lives with heart murmurs. To be safe, any murmur should be thoroughly evaluated by a veterinarian.