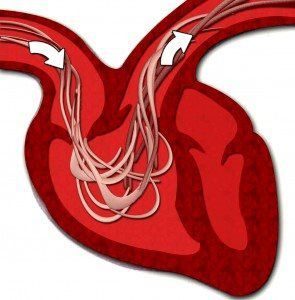 Heartworm Disease is a potentially life-threatening parasitic infection. Found worldwide, it mainly affects dogs and their wild relatives. However, it causes serious disease in some cats as well.

How Pets Get Heartworms
Heartworm Disease is caused by a worm, Dirofilaria immitis, and is spread by mosquitoes. When a mosquito feeds on an infected animal, usually a dog, it ingests microscopic larvae in the blood. These microfilariae mature in the mosquito for about two weeks. When the mosquito bites a susceptible animal the infectious larvae are injected into its tissues. They migrate through the animals body, maturing into adult worms over a period of months. The adult worms live in the heart and major blood vessels where they reproduce to create new microfilariae. The time from infection to appearance of microfilariae is about six months.

Cats seem to have a greater natural resistance against heartworms as compared to dogs. The prevalence of the disease in cats ranges from 0% to about 9% depending on geographic area. In the United States, heartworms are found in all 50 states but are most common along the Atlantic and Gulf coasts and near the Mississippi River. When cats do get heartworms, they usually only develop one or a few adult worms. The worms rarely reproduce or produce microfilariae.

What the Disease Does
Adult worms cause inflammation of the blood vessels and the lungs, and can obstruct arteries. They can live in a cats body as long as two or three years, but may be killed sooner by the animals immune system. As worms die, they release antigens that can create life-threatening inflammatory reactions.

Symptoms of heartworm disease in cats are vague. They include coughing, difficulty breathing, vomiting, loss of appetite, lethargy, and seizures. Some cats die suddenly without showing any other symptoms.

How Heartworm Disease is Diagnosed
Diagnosis of heartworms in cats is more difficult as compared with dogs. Blood tests for antibodies to heartworm are useful initially. However, the antibody test determines only whether the cat has been exposed. It will not differentiate between an infected cat and a cat that was exposed but fought off the infection. Therefore, antibody-positive cats should receive further testing. A blood test for the presence of the adult heartworm (antigen test) is often the second step. A positive antigen test confirms the presence of heartworms. However, the test can miss some infected cats, so other diagnostics may be needed too. These include physical examination, blood counts, microfilaria tests, x-rays, ultrasound, and angiography.

Treatment for Heartworm Disease
There are no medicines currently approved for treatment of feline heartworm disease in the United States. Cats with mild symptoms are monitored carefully and may be given anti-inflammatory drugs such as corticosteroids to minimize lung inflammation. A physical exam and x-rays are recommended twice a year. The goal is to support the cat until the worms have died and the inflammation has subsided. Cats with more serious symptoms are usually hospitalized and may require additional medications, such as bronchodilators, IV fluids, oxygen, and antibiotics.

Medications designed for killing adult heartworms in dogs are sometimes used to treat cats. This is considered an experimental use of these drugs and is undertaken with great caution, since the risk of fatal side effects is relatively high. Even more rarely, adult worms may be surgically extracted from a cats heart.

Preventing Heartworm Disease
Fortunately, effective preventive medications are available. They are given monthly and can be started as early as 4-6 weeks of age. Preventive medication is recommended for cats in areas where heartworms are common. Cats should be tested for heartworm before starting preventive treatment, and retested annually. Preventive is given seasonally in some parts of the U.S., but year-round in temperate areas. If a dose is missed, its best to give it as soon as possible and check with your veterinarian about the need for a heartworm test.