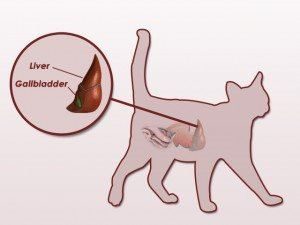 There are numerous causes of liver inflammation, or hepatitis, in cats. Cholangiohepatitis is a description of a certain type of liver dysfunction rather than a diagnosis of the cause. “Cholangio” refers to the biliary system: the bile ducts in the liver, the gall bladder that stores digestive fluid called bile which is produced in the liver, and the duct that delivers the bile into the duodenum or the upper-most section of the small intestine. Inflammation that arises anywhere in the biliary system leads to systemic illness thusly named cholangitis. Cats, in contrast to dogs, more commonly have primary disease of the biliary system (cholangitis) rather than the liver (hepatitis) itself; therefore, the term Cholangiohepatitis is now being replaced by Hepatobiliary Disease in cats.

Cholangitis is further categorized as neutrophilic (formerly suppurative or exudative), lymphocytic (formerly non-suppurative), and biliary cirrhosis. The neutrophilic form is associated with bacterial infection ascending from the small intestine. An accurate diagnosis of neutrophilic cholangitis requires exam and culture of bile since microscopic exam of biopsied liver tissue is nonspecific. The non-suppurative form is not related to bacterial infection, but is characterized instead by white blood cells called lymphocytes that infiltrate the liver. The exact cause is unknown. Biliary cirrhosis is the rarest form, caused by scarring of the bile duct walls and the surrounding liver tissue thought to represent an end stage of chronic biliary tract disease.

Symptoms of cholangitis include vomiting and diarrhea, subsequent dehydration, anorexia (loss of appetite), fever, and jaundice (yellowish discoloration of the skin and mucous membranes). In cats, cholangitis often occurs concurrently with pancreatitis and inflammatory bowel disease. The disease complex of the three interrelated organ systems is sometimes referred to as Feline Triaditis. It is most often thought of as an inflammatory disorder which may in part be associated with an immune response to bacteria and/or dietary antigens.

Cholangitis is diagnosed presumptively, based upon clinical signs and blood-chemistry results, until a tissue biopsy confirms the presence of the associated white blood cells that have infiltrated the liver tissue. Blood work may reveal elevated liver leakage enzymes, increased bile acids, abnormalities associated with dehydration, and possibly a mild anemia. Abdominal ultrasound is used to visualize the liver and biliary system, as well as collect ultrasound-guided needle biopsies of the affected tissues. A needle aspiration of the bile, to be examined by a pathologist, is also useful in diagnosing the cause of liver disease. Exploratory surgery is necessary where there is bile duct obstruction. Impeded bile flow will lead to complete liver failure and death unless the cause is found and corrected quickly.

Because the causes of cholangitis are variable, the appropriate course of therapy is determined on a case-by-case basis. Where there is a physical obstruction in the bile duct or gall bladder, the problem will be treated surgically. Antibiotics specifically targeted to bacteria that are identified with culture and sensitivity tests will be given to animals suspected of suppurative liver disease. Bacteria may produce toxins that are normally eliminated by the healthy liver but may accumulate in the sick patient.

Other medications useful in treating cholangitis include choleretics, or drugs that reduce bile viscosity and improve biliary flow. The most common choleretic used in animals is ursodiol, or Actigall. Lactulose is a disaccharide sugar that is not absorbed by the body, but acts to reduce bacterial toxin production and the toxic protein metabolite ammonia that may be absorbed into the bloodstream from the intestinal tract. S-adenosylmethionine, or SAM-e, is a potent antioxidant and liver cell protectant. Used in conjunction with milk-thistle, a nutraceutical supplement, these compounds are shown to decrease cell damage caused by biliary dysfunction and help the liver rebuild healthy functional tissue.

The prognosis for cholangitis is highly variable and depends on the underlying cause of the disease process. Obviously, cancers involving the liver and intestinal tract carry a more guarded to poor prognosis. On the other hand, it is difficult to predict the outcome of Feline Triaditis as the combination of organs affected by the disease makes it particularly challenging to treat. Cats will be treated long-term and eventually tapered to maintenance dosages of therapeutic drug combinations.

Dietary support includes feeding a highly digestible, high quality diet without protein restriction. Prescription diets are available for animals with hepatobiliary disease, and your veterinarian will determine the appropriate formula to feed your cat during and after treatment.