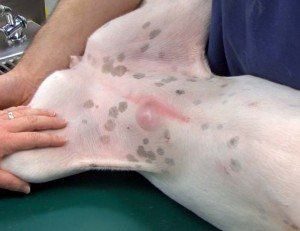 A hernia is defined as the protrusion of an organ through a defect in the wall of the cavity where it is normally located. The defect or opening itself is often referred to as a hernia. Hernias can be congenital or acquired traumatically. In either case, they require surgical repair to avoid strangulation of the organ and tissues that pass through them. If strangulation occurs, it can be a life-threatening emergency. Blood will not be able to circulate properly through the trapped tissues, and death to the cells from lack of oxygen occurs rapidly.

Congenital hernias are common. They are a result of inappropriate breeding. Animals with congenital hernias should not be bred, but in the name of profit, unfortunately, they continue to be used as breeders. The most common type of congenital hernia is umbilical. The opening in the abdominal wall where the umbilical cord passed from the fetus to the mother’s blood supply should close rapidly after birth. But in this case, it remains open. These are usually small hernias and only allow some abdominal fat to become trapped. They may seal on their own, and being sterile they may not cause problems. The fat will form scar tissue as it is devitalized when it loses blood supply. Occasionally, the hernia is large enough to allow a loop of intestine through. The larger hernia should be repaired to prevent problems in the future. Another type of congenital hernia is the inguinal hernia. The inguinal area is where the hind limbs meet the abdomen. These are always repaired surgically as they are typically large openings that do not close on their own. They are usually bilateral, meaning on both sides of the abdomen.

Traumatic hernias occur during a violent injury to the body such as being hit by a car or attacked by a larger animal. They can occur anywhere on the body, and they too will require surgery. A diaphragmatic hernia allows abdominal organs to enter the thorax, stopping the lungs from inflating fully. The animal will be in respiratory distress or even pass out. This is a critical situation that requires immediate treatment.

There are no symptoms of a hernia per se, only symptoms of a strangulated hernia. A reducible bulge on the abdomen that suddenly becomes very hard and cannot be reduced is an indication that the hernia has strangulated. The contents of the bulge may appear dark under the skin as the blood cannot circulate properly. The animal will be in a lot of pain and should be taken to the veterinarian immediately. Tissues begin to die after a very short time without oxygen.

After hernia surgery, the pet should have restricted activity for two to four weeks to ensure complete healing.