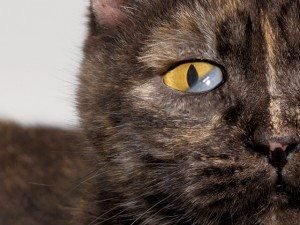 Most of the time, the cause of the nerve injury leading to this set of symptoms is unknown. Diseases of unknown origin are termed idiopathic. This accounts for more than half of all cases of Horner’s Syndrome. Also for unknown reasons, Golden Retrievers seem to be at an increased risk of developing the syndrome.

Other possible causes of Horner’s Syndrome include trauma or obstruction to the sympathetic nerve pathway at any point between the brain and the eye. The sympathetic nerves that supply the eye originate in the brain, follow the spinal cord into the thorax (chest), branch back up through the neck, pass through the middle ear, and terminate at the eye. There is a separate pathway on each side of the head. Fight wounds; trauma to the head, neck, or chest; tumors of the nerves, spine, thorax, eye, or brain; middle ear infections; and intervertebral disc disease are all possible causes of Horner’s Syndrome.

Reactions to certain ear medications can also cause inflammation of the tissues surrounding the nerves, resulting in iatrogenic (disease caused by treatment) Horner’s Syndrome. The symptoms will usually resolve shortly after the medication is stopped.

Horner’s Syndrome is not a diagnosis in itself; therefore it challenges the veterinarian to find an underlying cause of the syndrome. All pathological processes that may be responsible for these symptoms must be ruled out in order to conclude that the disease is idiopathic in nature. A diagnosis as to the cause of the nerve damage will also dictate the specific treatment needed, as well as reveal the prognosis, or expected outcome of the disease. Furthermore, there is no pain associated with idiopathic Horner’s Syndrome, but if trauma or malignancy is discovered, pain medications may be warranted.

Tests that will be needed when a pet presents with symptoms will include a complete physical and neurological examination, a blood count and blood-chemistry panel, x-rays of the chest and neck, and possibly an MRI (magnetic resonance imaging) or CT scan (computed tomography). A pupil dilation test using dilute phenylephrine drops in the eyes can help to identify the location of the lesion in the nerve pathway. Dilation of the affected pupil will occur within 20 minutes in an animal with a condition such as infection or cancer that involves the middle ear. This type of testing can be helpful but results do not always contribute practical information regarding the cause or the prognosis.

If a cause of nerve injury is revealed, it will need to be addressed medically to resolve the syndrome. Spinal cord and brain lesions or tumors causing the symptoms carry a guarded to grave prognosis. Idiopathic Horner’s Syndrome has a good prognosis on the other hand, and it will usually resolve on its own after 6 months without treatment.