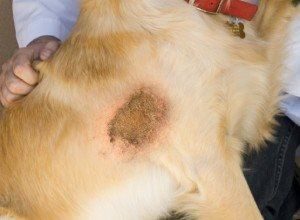 Hot Spots are oozing, inflamed, flat, and ulcerated areas of skin caused by self-trauma. Dogs and cats groom themselves by licking. When an irritant causes a hypersensitivity, pets may over groom to the point of destroying the top layers of the skin. Scratching can also cause a hot spot to form. Bacteria found in the mouth and on the skin will invade the broken skin causing infection. Fleas, allergies, matted hair, razor burn, and topical irritants like shampoos can all be factors that trigger hot spots. The hair is lost from the area but the margins are sharply defined from the surrounding normal skin and hair.

When an itch is scratched, endorphins are released in the brain, causing a sense of satisfaction. Endorphins are very powerful hormones that are associated with pleasure. So, just like a kid who won’t stop scratching a mosquito bite, the animal continues to lick or scratch because of the pleasurable sensation that is generated by the act.

Removing the irritant that started the process is essential to healing a hot spot, but this in itself will not usually stop the pet from licking. Mast cells involved in the inflammatory response that have aggregated at the wound release histamine, which causes the persistent itchiness. Antihistamines and corticosteroids like prednisone are used to provide relief. Creams and ointments that contain these drugs may be used topically. It is important to keep the animal from licking them off, so an Elizabethan collar may be placed around the neck to prevent further self trauma. If exposure to a known irritant has occurred, the pet may be bathed in an oatmeal based shampoo. Oral antibiotics are prescribed to help fight the bacterial infection in the inflamed tissue.

Hot spots can take a long time to heal; however, therapy is effective if applied promptly and vigorously.