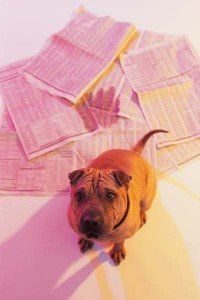 Inappropriate elimination is a common complaint from dog owners. It may be a matter of proper house training, a behavioral problem, or an underlying medical condition. House soiling may be intermittent or a chronic problem. In any case, it should never be assumed that the dog is eliminating in the house to spite the owner. Punishment can actually reinforce the behavior especially when the cause is anxiety related. Attributing human emotions to dog behavior is a natural assumption to make, but dogs are not people and their motivations are not the same as ours. This topic addresses potty training specifically and assumes that there are no underlying medical or behavioral reasons for inappropriate elimination or incontinence.

Be patient with a puppy. Their attention span is short, and like a child, puppies do not predict when they might need to “go”. They may be in the middle of play or eating when the urge strikes them. Sometimes a puppy will urinate or defecate as soon as you let them back in the house. This is especially frustrating, but they will get the idea soon. Never punish a puppy for an accident, and never let him see you clean up the mess.

Crate training is an excellent way to house train a puppy. This method should be distinguished from convenience crating, which is simply locking a dog up when you leave to keep them out of trouble. Convenience crating teaches the dog nothing and is only – as the name implies – for the owner’s convenience. Crate training to potty train a puppy lets the dog establish a routine. Eliminations begin to occur on a schedule, reducing the randomness that puppies tend to have with their bowel movements and urination.

Feeding wakes up the entire digestive tract. Bowel movements occur shortly after feeding a puppy. Keep this in mind, and spend as much time as it takes to let the puppy eliminate outside afterward. Lavishly reward the puppy during and after elimination with praise or a small food reward for positive reinforcement. Playtime outside will also stimulate a bowel movement. Just keep the play somewhat subdued since the pup just ate. You don’t want him to regurgitate or vomit his food.

Crating for a short period of time teaches the puppy that it is time to rest. He should not be, however, crated for longer than he can control elimination, or he may be forced to eliminate in the crate. If the puppy must be left for longer than it can control elimination, a larger confinement area such as a pen or puppy-proofed room will be necessary. The exception to this rule is overnight. As soon as a puppy can sleep through the night without needing to eliminate, let them.

Try to plan crating on as close to the same schedule as possible for two weeks. If the puppy is picking up on the schedule well, slight variations can be made to the crating times. If you are an hour late getting home, expect an accident.

When the schedule is fairly routine, begin leaving the puppy in a small area that is blocked off from the rest of the house. Take the door off the crate, and leave it in the room with the pup to use as his bed. Leave the house for very short periods of time, no more than twenty minutes at first. When you get home, take the puppy outside to urinate, and praise the good behavior.

A few follow-ups on the crating schedule will correct any mistakes that the puppy makes. This will usually not take more than a few weeks. Soon, he will be able to have free reign of the entire house while you are away. If the puppy continues having accidents, if he urinates in the crate or overnight, or if he’s not getting the routine down at all, it may be an indication that some part of the crate training technique needs to be revisited or a medical problem may be present. Consult a veterinarian for advice and treatment.