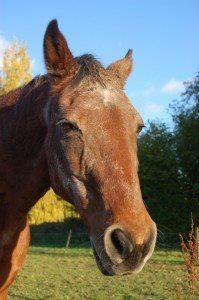 Humane euthanasia is a preferred alternative to unnecessary suffering when a horse has a fatal injury or an unmanageable disease. It is the greatest and most difficult responsibility of being a horse owner to be sure that the animal does not suffer an agonizing end of life. It is also difficult to know when euthanasia is justified. While there are numerous factors to be considered when assessing treatment options for various ailments (side-effects, expense, rate of success, etc.), the only real measure to indicate that it is time to euthanize is prognosis. Prognosis is a prediction of the most likely outcome of an illness. It may be influenced by what treatment options are available to the horse owner, but in the end prognosis will be what determines the most humane course of action. Once a decision has been made to euthanize, the next question will be how to end life humanely. The process itself must not cause unnecessary suffering.

The veterinarian will be most helpful and experienced in determining the prognosis for the horse fallen ill. For acute injuries and sudden onset diseases, the doctor will assess the animal for level of pain, underlying factors that predisposed the horse to the problem, the risk to other exposed horses in the herd, and likely secondary complications. In chronic conditions, factors that play a role in determining prognosis are whether the horse is responsive to therapy, the ability to control pain on a long-term basis, side-effects that have occurred or are likely to occur, and the horse’s ability to eat, drink, and rise unassisted.

Expense is a factor in either situation and cannot be overlooked as a justification for humane euthanasia. Some owners may be in denial about whether they can truly afford a long-term and complicated treatment regimen. This may result in the horse receiving less than adequate relief from suffering, which will be regretted after the owner realizes that the end was inevitable. Expense should be considered as well for its negative impact on the care that is provided for the other animals on the farm, not to mention the horse owner and his or her family. The owner should not be ashamed to recognize this fact.

Some of the common terms used by the veterinarian to describe the horse’s prognosis are good, fair, guarded, poor, and grave. A guarded prognosis may warrant an attempt at treatment, which may turn out to be successful; however, the owner is forewarned to be on the lookout for a possible decline in the animal’s response to therapy. At that point, alternate treatments if available should be explored, or euthanasia should be considered. A poor prognosis may indicate that palliative care (relief from pain) may be administered while the owner makes arrangements for burial or cremation, but the actual disease or injury will not be addressed per se. A grave prognosis would mean that immediate humane euthanasia is the only option.

Humane euthanasia is performed by one of three acceptable methods: lethal injection, gunshot, or penetrating captive bolt gun. Each requires a careful technique to ensure that the horse does not suffer needlessly. There are pros and cons to all three methods, which are described below:

Lethal injections require the animal to be completely unconscious, usually requiring anesthesia. Some drugs formulated for the sole purpose of euthanasia combine a barbiturate that induces coma, along with a drug that causes heart and lung paralysis which leads to brain death. If administered properly, the animal feels absolutely nothing and dies in its “sleep”. Most owners prefer this method because it is peaceful and bloodless when everything works as intended. Sometimes, illness in the horse such as reduced circulation can cause an increased time for the drugs to take effect. The animal may twitch or convulse before expiring, which is obviously upsetting for the owner to see. Some animal care professionals that are unlicensed to carry controlled substances have access to only the drugs that only stop the heart and lungs. These should not be used on a conscious horse, as death may be cruel and cause suffering.

Horses that are euthanized by the lethal injection method must be disposed of in such a manner as to not allow accidental exposure of domestic animals and wildlife to the carcass. Immediate disposal by deep burial or cremation is mandatory. Check with local ordinances about burial regulations.

Euthanasia by gunshot seems atrocious to some owners, as guns are perceived as tools of violence. However, if performed properly this method is just as humane as a lethal injection. It is also sometimes the only method available (i.e.: in emergencies, no vet available, no anesthesia available, burial or cremation will be delayed). The drawback to this method is primarily the emotional distress for the horse owner and family witnessing the event, as it is very loud and sudden. The horse may be fully conscious at the time which is also upsetting to observers. If performed correctly however, euthanasia by gunshot is extremely quick (avoiding stress and suffering in the horse), very reliable (little movement afterward, no chance of drug failure), mostly bloodless, and very humane. The horse feels nothing as brain function ceases immediately. Guns can be very dangerous to the operator, bystanders, and other animals if handled improperly.

A description is given below on the proper method to administer euthanasia by gunshot. This is intended ONLY to prepare a horse owner for an emergency situation, where the expertise of a veterinarian is not available or if time does not permit.

A handgun or long rifle may be used, but a handgun is preferred if no one is available to assist. A rifle is also more likely to create a significant exit wound which will not be bloodless. With a handgun, the owner can hold the lead in one hand and the gun in the other. With a rifle, an assistant can hold the lead at a safe distance behind the gun operator. In either case, the gun is held at point-blank range (but never up against the head), and never from a long distance.

The type of bullet is critical. A soft-nosed, lead bullet or hollow point may be used, but full metal jacket bullets are to be avoided. The first two types will expand, rapidly slowing upon impact, and transfer all of their energy to the tissue, causing immediate death. Full metal jacket bullets will pass through the animal without expansion, and may put other people and animals even at great distances at risk if the bullet were to ricochet. There is the possibility of the horse taking a long time to expire if the wrong type of bullet is used.

Nothing smaller than a .22 caliber long-rifle bullet (.22LR) should be used to euthanize the horse. Some people say the .22LR may not have enough energy when fired from a handgun barrel, but from a rifle it would develop the speed and energy necessary. The .32 cal, 9 mm, or .38 spl are also acceptable calibers.

The bullet should enter the animal at exactly the correct location to ensure humane treatment. Never shoot the animal between the eyes or in any other location besides the following. If an imaginary “X” is drawn from the base of each ear to the top of the opposite eye, the bullet will enter where the lines intersect. The gun barrel must be held perpendicular to the skull at the point of entry, which will cause the bullet path to point straight down the center of the neck.

Hold the horse’s lead in order to keep its head from moving, but keep your lead hand behind the gun barrel at all times. The end of the barrel should be held 1 to 2 inches from the horse, never pressed up against the skull. If possible, the horse should be on soft ground to prevent a ricochet should the bullet pass through the animal. In any case, every one involved – people, other horses, dogs, etc. – everyone should be behind the gun except for the horse to be relieved of its misery.

The horse will usually buckle straight downward, but be prepared that it could fall forward, injuring the owner. Also, if it is possible to blindfold the horse, it may help to reduce anxiety of having a shiny object waved in front of its face. A blanket can be used for this purpose, but be sure that shot placement is exact.

Keep in mind that the horse will have to be removed from the location where it was euthanized, so consider the use of equipment if the horse is able to move before performing the procedure.

No one should attempt to use a gun in this situation that is not completely comfortable with their use beforehand.

A penetrating captive bolt gun accomplishes the same immediate brain death induced by gunshot. This method also requires careful technique to ensure a humane treatment of the horse. Most bolt guns are designed to be placed firmly against the skull, but otherwise placement and precautions are nearly identical to euthanasia by gunshot. Bolt guns are designed specifically for euthanasia and have the benefit of being supplied with an instruction manual. Follow the manufacturer’s directions carefully to avoid improper application of the device and needless suffering in the animal.

Unacceptable methods of euthanasia which would be inhumane (and may be considered animal torture or abuse) include:

Injection of any chemical or drug not labeled specifically for euthanasia

Poisoning – by ingestion or otherwise

Gunshot other than as described above