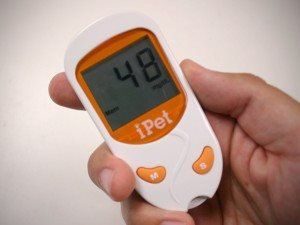 Hypoglycemia refers to a decrease in the amount of glucose in circulating blood that should be available to the tissues of the body as a primary source of energy. Glucose is a very basic sugar that is utilized as fuel by every cell to survive and function. All food that is consumed may eventually be broken down into glucose. Food that is not immediately required by the body for energy is converted to fat to be stored for later processing into glucose. When blood glucose levels drop significantly, cells in every system of the body including the brain, heart, vital organs, and skeletal muscles cease to function properly. A total depletion of glucose can lead to weakness, seizures, coma, and death if the condition is not corrected quickly.

There are several reasons that hypoglycemia may occur. In very young puppies and kittens, the problem may be simply a cause of inadequate food intake. If these infants are unable to nurse frequently, or if weaning onto solid foods is unsuccessful, the blood glucose will drop rapidly as energy is depleted. Young animals have not had time to develop fat stores to protect them from prolonged periods of starvation (anorexia).

Long-term anorexia may also lead to hypoglycemia in adult animals. This may occur in lost or trapped animals or in those with other diseases preventing normal food intake.

In diabetic animals, over-supplementation of insulin is the most common cause of hypoglycemia. Insulin is a hormone that carries glucose into cells. Without insulin, cells cannot utilize the sugar for fuel. Diabetes is a caused by either a deficiency in the production, or a resistance to the mechanism, of insulin. Therefore diabetics are supplemented with insulin by injection to help the body utilize glucose properly. If too much insulin is given, either because of a miscalculated volume or by accidental repeated injections, the circulating glucose will be driven into the cells rapidly leaving none to be utilized in the immediate future. Also, if a diabetic animal misses a regular meal or experiences a particularly stressful event, the blood-glucose may drop suddenly after a dose of insulin is given.

A rare cause of hypoglycemia occurs as a result of an insulinoma, a tumor that continually produces insulin regardless of the body’s energy demands. The tumor is formed by abnormal beta cells, the cells in the pancreas that are responsible for the production of insulin when stimulated by food intake and increased blood-glucose levels. Insulinomas produce the insulin hormone regardless of the presence of glucose, and hypoglycemia results if the animal cannot continually replenish the supply by eating.

Symptoms of hypoglycemia begin as lethargy, weakness, and disorientation followed by incoordination of the limbs (ataxia), stupor, seizures, coma, and death. In a very young animal with any of these symptoms, hypoglycemia should be immediately suspected and treated presumptively. Many other diseases and toxicities may lead to similar symptoms in adult animals, and diagnostics may be performed before assuming hypoglycemia as the cause.

Hypoglycemia is generally easy to reverse, yet the underlying cause of the condition is very important to realize in order to prevent recurrences. If the pet is conscious and able to swallow, oral supplementation of high-sugar foods may be given. This remedy should be applied at home assuming the pet is able to ingest food safely, followed by an examination by the veterinarian. Unconscious pets may be administered intravenous glucose by injection to quickly bring blood-glucose levels back to normal. Owners of diabetic pets should always keep an emergency supply of honey, Karo syrup, or high sugar treats on hand in case of an accidental insulin overdose.

Restoring blood-glucose levels to normal is generally an immediate cure, and long-term effects are rare if hypoglycemia is treated quickly.