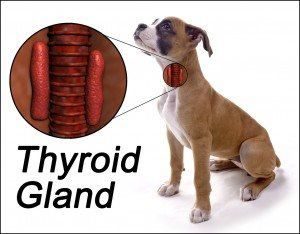 Hypothyroidism is a very common disease in dogs. The term hypothyroidism denotes an underactive thyroid gland, as opposed to hyperthyroidism, which is very rare in dogs and involves an overactive thyroid gland. The thyroid produces a hormone called T3 (Triiodothyronine) that regulates growth and development, and metabolic function of every cell in the body. As a result, a decrease in T3 can be devastating to all systems, slowing heart-rate, brain function, and calorie utilization. T4 (Thyroxine), the other hormone produced by the thyroid, circulates in the bloodstream until it is needed by the cells. It will be converted to T3 as needed. Hypothyroidism is easy to treat with synthetic hormone replacement; however, diagnosis is not always straightforward.

While the effects of hypothyroidism are system-wide, dogs will generally exhibit a classical appearance with obvious clinical symptoms. Almost all dogs will have some type of skin disease, and at least half of those will have alopecia (hair loss) especially around the tail and collar areas. Some owners will describe a “puppy coat” on an older animal when the coarser hairs break off leaving the softer undercoat. Hair may not grow back at all after a summer grooming. Thickening of the skin folds on the face and head, and odor from the skin is a common finding. Half of hypothyroid dogs will be overweight and lethargic, and half of those may be anemic. On examination, patients may have a slow, arrhythmic heart beat. Severe and chronic hypothyroidism can lead to neuropathies (dysfunction of the nerves) and paralysis of the face and limbs. These animals may exhibit a drunken gait, head tilt, facial nerve paralysis, or nystagmus (rapid eye motions associated with dizziness).

Testing for hypothyroidism has changed as new methodologies have been developed. As previously mentioned, the thyroid produces two hormones, T3 and T4. Low levels of these hormones should indicate disease. However, T3 fluctuates constantly throughout the day, making it unreliable for predicting hypothyroidism. The majority of T4 (called total T4) is bound by proteins and is not available for use by the cells. Because it is susceptible to being low during times of stress and illness, total T4 being low does not confirm disease either. A hormone produced by the pituitary gland called Thyroid Stimulating Hormone (TSH) should be elevated when thyroid levels are low; however, in about 25% of hypothyroid dogs, this is not the case. The newest testing protocol measures free T4, the portion of T4 that is available to the cells. The other tests may be used to gain supporting evidence of disease but are not analyzed alone. Free T4 does not fluctuate as severely as the other hormones and is more predictive of disease. The name of this laboratory test is Free T4 by Equilibrium Dialysis (fT4ed). A lab result called fT4 that does not designate “ED” is not useful to predict hypothyroidism.

Sometimes a classical appearance and symptoms make a patient highly suspicious of being hypothyroid, but lab results come back in the “gray zone”. In these patients, supplementation may be started to measure response to treatment even when a clear diagnosis is not confirmed with blood work.

Treatment should resolve most if not all symptoms of illness. A synthetic T4 hormone is given orally twice daily, and lab work is periodically rechecked to ensure proper dosing. Hair loss and skin problems may take several months to completely resolve. Once well regulated, some patients can be reduced to once a day dosing of thyroid supplement. It should be noted that dogs require a much higher dose of thyroxine than do humans. Thyroid supplement for dogs is not available at human pharmacies, and people should never take the dog form as a substitute for their own thyroid supplement. Long term overdosing of thyroid supplement can lead to weight loss, vomiting, rapid heart rate, high blood pressure, abnormal pupillary light reflexes and rapid or difficult breathing.