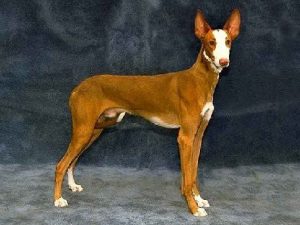 Like the Pharaoh Hound, the Ibizan is purported to be the dog-god Anubis of the ancient Egyptians.  Certainly, a breed resembling them did exist more than five thousand years ago, but whether or not they are the same breed is not exactly known.  The Ibizan Hound is traceable to the Balearic Islands off the coast of Spain.  Especially to Ibiza, the island that gave it its name.  Used to course hares in Ibiza.  In spite of its ancient lineage, the speedy hunter was not introduced to the United States until 1956, where it gained entrance to the American Kennel Club (AKC) in 1979.