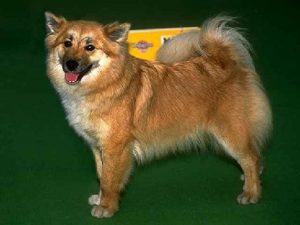 This breed is believed to have been originally brought to Iceland by the Vikings where it was used as a herding dog.  It came close to extinction in the early 1900′s when it was almost wiped out by a viral epidemic (probably distemper).  Thirty years later, most of the Farehonds were killed to stop an epidemic of tapeworm that is communicable to sheep and humans.  A few of the breed were sent to England in the 1950′s and it has thrived there and on mainland Scandinavia.  It has been accepted for showing under Fédération Cynologique Internationale (FCI) rules, and is now making in-roads back into its native Iceland.