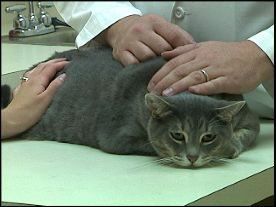 Feline Immunodeficiency Virus (FIV) is a serious viral disease of cats that is similar to HIV/AIDS in humans. About 1 3% of cats in the United States are infected. It does not affect other animals or people. FIV can be prevented, but not cured.

How Cats Get the Virus
FIV is spread mainly through bites that occur when cats fight. Rarely, mother cats pass the virus to their kittens during pregnancy, birth or nursing. Blood transfusions are another potential, but uncommon, source of infection. FIV does not survive outside a cats body, so the disease is not spread by casual contact or by sharing food bowls.

What the Disease Does
When cats first become infected, there are few if any symptoms. Some cats develop a fever, swollen lymph nodes, diarrhea or anemia. Once infected, almost all cats harbor the virus for life but many remain healthy for years. At some point the virus attacks the immune system, leaving the cat unprotected against other diseases and parasites. Microorganisms that do not ordinarily harm healthy cats can make FIV infected cats severely ill.

How to Find Out if Your Cat Has FIV
Your veterinarian can perform a simple blood test to check for FIV. Its a good idea to test all new cats, especially if you already have other cats in your household. Cats that go outside should be tested every year. If your cat tests positive, follow-up tests can double check the accuracy of the first one. This is especially important for kittens under six months of age, in which positive results are often caused by immunity from the mother. If these cats test negative later in life, they likely were never infected with the virus.

Caring for FIV-Positive Cats
Although there is no cure for FIV, there are several steps owners can take to keep their FIV-infected cats as healthy as possible. To protect him from secondary infections and to prevent the spread of the virus, keep your FIV-positive cat indoors. It is preferable to separate him from uninfected cats. Keep him up to date on his routine veterinary care and vaccinations. Checkups are recommended every six months. Although FIV is incurable, treatment is given for secondary infections and to reduce symptoms. Immunomodulators and antiviral drugs may also help.

Preventing FIV
Because FIV cannot be cured, prevention is crucial. Keeping cats indoors is the best method because it prevents exposure. Cats that do go outside should be spayed or neutered to reduce the likelihood of fighting. When adding a new cat to a household, test it before it meets its housemates. Infected and uninfected cats can live side-by-side without transmitting the infection as long as they dont bite each other. However, there is always a risk.

A vaccine recently became available to protect against FIV. Unfortunately, there is no test to distinguish between a vaccinated cat and an infected cat. This creates a serious dilemma, since infected cats require special care. Worse yet, FIV-positive cats are commonly euthanized by animal shelters. Until new tests are developed, the decision whether or not to vaccinate will be a difficult one you need to discuss with your veterinarian.