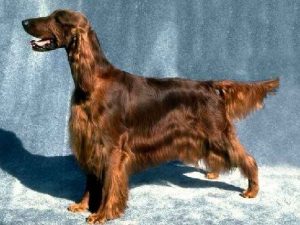 The original setter was used to point game and then drop, or set, while nets were thrown over the birds.  With the advent of firearms about four hundred years ago, the job of the field dog changed.  The original setters were bred with heavier Spanish pointers and a whole new, and quite handsome, type of dog was created.  The English Setter and Irish Setter share a common ancestor.  The original Irish Setters were red and white (a color not allowed in United States show rings) and is still found in Europe.  A star in the show ring due to its burnished copper coat, it is overshadowed in the field by the English Setter.  The Irish Setter was one of the foundation breeds represented in the American Kennel Club (AKC).