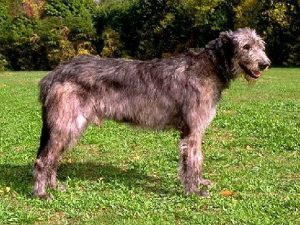 One of the oldest of purebred dogs, the Irish Wolfhound was the hunting dog of the Celtic people.  It followed them on their migration across Europe and became the dominant coursing hound in Ireland, where it was so good at its job it exterminated the last wolf in the mid 1800′s and almost destroyed itself with it.  The deer hunters were exclusively the possession of the aristocracy who, of course, owned the deer in Ireland and England.  Combining great speed and strength, the Irish Wolfhound found a place as a hunter’s companion on the American and Canadian frontier and even later in Australia.