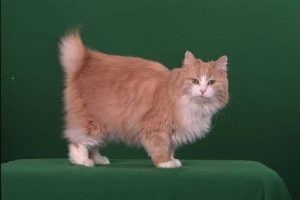 Imported from China or Korea into Japan at least 1,000 years ago.  Featured in Japan’s ancient prints and paintings.  Imported to United States in 1968 with all registered Japanese Bobtails able to trace their ancestry back to the original imports.  Accepted for championship in the Cat Fancier’s Association (CFA) in 1976.