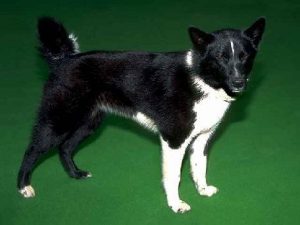 A Spitz-type dog, the Karelian Bear Dog was used by the early Finnish settlers to hunt bear, lynx and wolf.  It was used in vast numbers at the turn of the 20th century and was recognized by the Finnish Kennel Club in 1935.  The striking black and white markings and light colored eyes make the dog distinctive in appearance but it has not gotten very popular outside of Scandinavia because of its fierce and quarrelsome nature.  This makes a good dog to take against bears but a difficult one to live with, especially in cities and suburban areas.