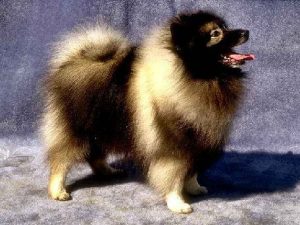 The Keeshond is named after Cornelis “Kees” de Gyselaer, the leader of the Dutch rebels who rose up against the House of Orange in the late 18th century.  The King used the Pug as his symbol, so de Gyselaer chose his own dog to be the symbol of the revolution.  The dog became known as the dog of Kees or Keeshond.  It made the Keeshond famous.  Of course, being the symbol of a political movement can have its drawbacks, too.  When the monarchy regained power, the Keeshond disappeared from the cities.  A few of the barge captains kept it as a guard dog, and as a result it got its other name, the Dutch Barge Dog.  The present day Keeshond was first shown at a dog show in Holland in 1891.  A breed standard was drawn up in 1933 in its native land, but the American Kennel Club (AKC) did not approve one until 1949.