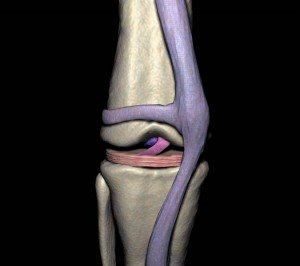 A luxating patella (kneecap) is a congenital abnormality common in smaller breed dogs. This condition is a consequence of common musculoskeletal changes such as bowing or rotation of the bones in the limbs, a shallow groove where the patella is normally seated, or displacement of the quadriceps muscle group. The patella is attached to the muscles of the upper and lower leg by the patellar tendon. It normally moves in a vertical path between two ridges (trochlea) on the femur. Because of the musculoskeletal changes, the patella is displaced medially (toward the inside of the knee) as the muscles stretch in a straight line. This causes instability, pain, and arthritic change in the knee. The typical gait of a dog with a luxating patella is an intermittent skip in the affected leg. When the patella pops out of place, the dog may sit and extend the leg to alleviate pain. Or he may kick out the leg behind himself as he runs three legged. This will allow the patella to move back into its normal position, and the dog will resume a normal gait. In severe cases, the patella stays luxated and rides along the medial surface of the femur. Surgery is the only way to repair a luxating patella. Severe arthritis and reduced range of motion will eventually occur if left untreated.

X-rays are taken to rule out hip dysplasia and other problems that may not allow satisfactory resolution of symptoms after surgical repair.

A general anesthetic is administered to perform x-rays, deep palpation of the knee, and then surgery on the affected knee. An incision is made along the lateral side of the knee and into the joint capsule. The patella and patellar ligament is pulled to the side. The joint is at this point inspected to assess the condition of the cruciate ligaments and menisci. A “V” shaped wedge is removed from the femur where the patella rides between the trochlea. The wedge is trimmed slightly, and then replaced to create a deeper valley to hold the patella in place. The lower patellar ligament is attached at the tibial crest, and this crest is cut free of the bone to be pinned back down in a more lateral (away from the middle) position. The objective of the surgery is to force the patella to move in a more normal vertical path along the front of the femur. The joint capsule is then sutured closed. An intra-articular local anesthetic may be injected into the joint to improve pain control during recovery.

Recovery takes about 10 to 12 weeks, with restricted activity and range of motion exercises. Pain medications and antibiotics are sent home with the pet. An Elizabethan collar is placed to prevent the dog from licking and chewing at the sutures. GAG supplements (chondroitin) are used on a long-term basis to improve joint health and prevent arthritis and pain.