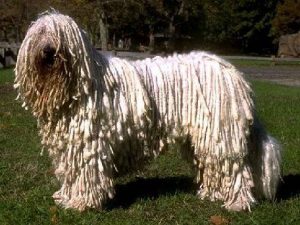 The Komondor and the Kuvasz (the two large, white, sheep dogs of Hungary), were first used by the nomadic Magyars to protect their herds from predators, both animal and human.  These giant guardians are always white, a color that allowed the shepherd to tell his dogs from the wolves which were darker in color.  The actual origin of the breed is obscure, but Hungarians say they have guarded the herds since the beginning of time, and leave it at that.  Old drawings show us that the Komondor has not changed much in the last five hundred years.