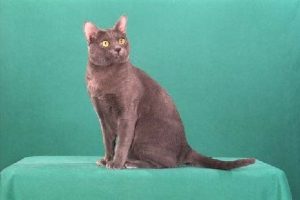 Considered to be the native cat of Thailand where it is a symbol of good luck.  Earliest picture of a Korat is found in the ancient book of paintings and verses known as The Cat-Book Poemsin Bangkok’s National Library.  In 1959, the first known pair of Korats were imported into the United States.  Accepted for championship in the Cat Fanciers’ Association (CFA) 1966.