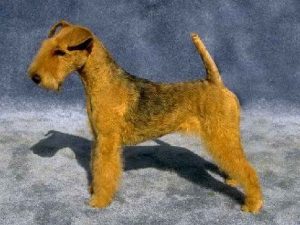 Developed in the lake district of the north England, the Lakeland has strong working roots.  Farmers trained the little terriers to attack foxes, which raided their sheep.  Fox hunts often carried Lakeland Terriers to use as the go-to-ground terrier to root the fox out of its lair.  In the early 20th century, the breed was standardized.  In 1921,  it began to be shown as the Lakeland Terrier in England.  Known for their courage and endurance, the Lakies were recognized by the American Kennel Club (AKC) in 1934.  It remains relatively unspoiled, never having achieved great popularity.