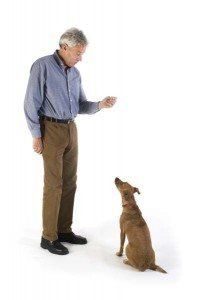 Dogs are not born knowing the difference between right and wrong. Instead, they are conditioned by the positive and negative consequences that follow their actions. We train dogs purposely and inadvertently by our responses to their behavior. Environmental consequences can also condition a dog’s behavior which may result in favorable or undesirable traits. Dogs begin to respond to stimulus the second they leave the womb, and they are never too old to continue learning.

Consequences for behavior can be classified as either positive or negative (giving or taking away), and either reinforcement or punishment (encouraging or penalizing). Do not think of positive and negative in terms of good and bad. Rewards can come in the form of verbal praise or satisfying feedback such as a tasty treat or a comforting pat on the head. This would be an example of positive reinforcement. A reward is given after “good” behavior. Rewards can inadvertently reinforce inappropriate behavior as well. Such is the case when a treat is given to “calm” an aggressive or agitated dog. A soothing voice saying “it’s okay” to a fearful dog may actually positively reinforce anxious behavior that is undesirable. Human emotions do not translate into dog emotions, and many training problems stem from our instinct to reassure a dog in situations where we would want reassurance ourselves.

Positive punishment would seem to be a contradiction in terms, but remember that positive simply means to give something for an action. This is the most common form of punishment that we institute. Giving something unpleasant for an inappropriate behavior, such as a stern “NO” for barking at the cat, is an example of positive punishment. It is well known that punishment is effective to curb behavior, but must be used consistently in order to establish strong boundaries. Unless a bad behavior is already established, positive reinforcement is a more effective training method.

When something unpleasant is removed after a behavior, it is referred to as negative reinforcement. This is almost always an inadvertent reaction to the dog’s behavior of which we might not even be aware. Separation anxiety is started and made worse by this action and consequence. A dog that dislikes being left alone (and acts out with inappropriate, often destructive, behavior) is rewarded when the owner comes home and removes the unpleasant situation. This reinforces the bad behavior, and the dog learns that his actions caused the owner to come home. Reassuring the dog afterward adds positive reinforcement to the already confusing situation.

Negative punishment is the last learning method, and is rarely utilized to train a dog. It involves removing a reward when behavior is inappropriate. In human terms, this almost equates to spitefulness. Taking away a treat or a bone after a dog does something wrong is difficult for the dog to associate with the bad behavior. A verbal rationalization for the punishment is needed to point out the cause and effect. This might work for a child, but it is hard to communicate the consequences to an animal.

Learning behaviors in dogs are easy to conceptualize, but because of our human instincts, they can be hard to implement. Often, we misleadingly interpret our dog’s behavior as the way we would react to a situation. Dogs are highly intelligent animals, and with the right training they are always eager to learn.