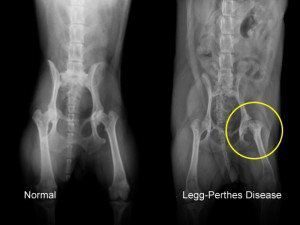 Legg-Perthes disease is a painful condition affecting the hip joints of mainly young, small breeds of dogs. It is overall fairly rare, but breeds that have a genetic and heritable predilection to the disease include the terriers, miniatures, and toy breeds. Also known as avascular necrosis of the femoral head, this problem occurs when there is an interruption of the blood supply to the head of the femur, part of the ball and socket joint between the pelvis and femur. Most of the time, symptoms will occur between 5 and 8 months of age and occasionally up to a year old. The puppy may cry out when the rear limb is extended or during activity. Limping and avoidance to bear weight is very common in one rear leg. Very occasionally, the disease affects both hip joints.

Specifically, the hip joint is a ball and socket type attachment between the rear leg and the pelvis. The femur (thigh bone) runs vertically through the hind leg and is topped with a neck that points toward the body. At the end of the neck is a smooth ball that fits snugly into a socket in the pelvis called the acetabulum. The ball and neck collectively are referred to as the femoral head. This is the portion of the femur bone that is affected by the loss of blood supply associated with Legg-Perthes disease.

Usually, the affected puppies are born with normally developed and functional hip joints. For some reason, the blood supply is reduced to one or both femoral heads causing the surface of the bone and cartilage covering it to necrose, or die. This causes a poorly fitting joint with a rough and painful surface. Trauma can also cause aseptic (non-infectious) avascular necrosis of the femoral head; but, in most cases Legg-Perthes is thought to be a genetic defect.

As the hip becomes progressively more and more painful, the puppy will use the limb less and less. Overall range of motion becomes decreased, and the leg muscles begin to atrophy, or shrink from lack of use. Advanced cases will often show a visible decrease in the muscle mass over one hip.

Along with a physical examination, x-rays are used to diagnose the symptomatic animal. Compared to the smooth surfaces of the healthy hip joint, the femoral head affected by Legg-Perthes will appear rough and dysplastic (malformed and misshapen). The density of the bone will be decreased; and, in the very early stages of the disease, this may be the only change evident on the radiograph.

Medications can be used to treat the pain associated with Legg-Perthes, but ultimately the condition will require surgical treatment. Because the problem stems from blood supply problems, and because the animal is still growing, hip replacement is not typically an option. Instead, a salvage procedure called a femoral head and neck ostectomy (FHNO, or FHO) is performed to remove the diseased portion of the femur.

During a femoral head ostectomy, the ball and neck portion of the femur are removed, and any irregularities remaining on the femur are removed. This requires disarticulation (separation) of the joint unless the hip is already severely dysplastic or traumatically separated. The muscles that support the limb attach below the neck of the femur and are not affected by an FHO surgery. The joint capsule tissue is then closed if possible, followed by the muscle and subcutaneous tissue. Finally, the skin is closed with sutures that will be removed in a couple of weeks. Usually, there is no need for bandaging; although, an e-collar is recommended to keep the puppy from chewing at their sutures.

An FHO is sometimes referred to as a “salvage procedure”; so called because the bone and joint are not restored to their original form and function. Instead, a portion of bone is removed, and a “false” joint, or scar tissue pad, forms in place of the hip joint. The result is alleviation of pain and close to normal function of the limb. FHO’s have been successfully performed in four-legged animals as large as horses. Small dogs do very well with this type of surgical correction.

This is one procedure where activity is not restricted afterward. The growth of the scar tissue pad that forms in place of the joint is dependent on the limb being used. Range of motion exercises should be performed as soon as the dog will tolerate them. These involve gentle flexion and extension of the entire leg in repetitions several times a day. Good pain control will help the pet begin using the limb within a couple of weeks of surgery. If all goes well, it will be difficult to visually discern which leg has received an FHO procedure after complete recovery.

Even though a femoral head ostectomy is sometimes called a salvage procedure, it is actually a very practical and effective remedy for pain. It is the treatment of choice for Legg-Perthes Disease.