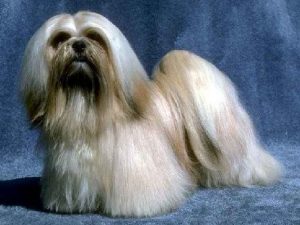 In the holy city of Lhasa, there is a beautiful palace called Potala and there the high priest called the Dalai Lama sat on the Lion Throne of Tibet.  His palace guardians were tiny watchdogs bred to resemble the sacred lion that is believed to be the protector of Buddha.  An ancient breed, and probably foundation stock for some of the Chinese dogs, the Lhasa didn’t reach the West until the 1920′s when the Dalai Lama gave some as a gift to an English doctor.  The breed made its way across the Atlantic via Britain, and was recognized by the American Kennel Club (AKC) in 1935.