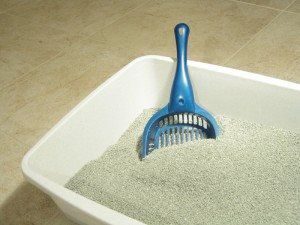 One of the most appealing aspects of owning a cat is that they are generally clean and require little training. Most kittens have already learned appropriate litter box use from their mothers long before they are adopted. Unfortunately, there are several things that can go wrong that cause cats to urinate in places we find offensive. Inappropriate elimination is the most common behavioral problem recognized in cats.

Urinary Tract Illness
When a cat begins urinating outside the litter box, the first possibility to be considered is illness. Cats with bladder irritation or infection frequently urinate in unusual places including potted plants, sinks, and bathtubs. There is often only a tiny amount of urine in each place, and it may be bloody. Kidney failure, diabetes, and some medications can cause cats to urinate more. They may be unable to wait to go outside or to get to the nearest litter box. They generally produce large amounts of watery urine. A physical examination, urine and blood tests can identify or rule out medical causes for elimination disorders.

Urine Marking Behavior
Spraying urine is a normal marking behavior in un-neutered male cats. Spraying differs from ordinary urination because the cat remains standing and the urine is sprayed onto a vertical surface behind him. Neutering male cats as early as possible reduces this behavior. However, neutered males and female cats can spray too. This is more likely when the cat is distressed or anxious and occurs more often in multi-cat households.

Aversions and Preferences
Some cats develop aversions or preferences with regard to locations or substrates for urination. The most common sources of aversions are dirty litter boxes, strongly perfumed litter, and litter boxes placed in busy areas where the cat may feel insecure. Some cats develop a preference to urinate only in a particular spot in the house, or only on a certain material such as carpeting or plastic.

Treating Inappropriate Urination
After ruling out medical concerns, the veterinarian must address underlying emotional issues. Removal of stressful stimuli such as dogs and other cats may help. Antidepressant and anti-anxiety medicines are sometimes used. A spray that mimics a natural calming hormone of cats has shown benefit as well. Litter boxes are adjusted to encourage the cat to use them. Boxes can be provided in preferred locations and with preferred substrates. Aversive factors should be eliminated. This can involve a lot of trial and error, such as providing numerous litter boxes or different types and observing which are most preferred. Unfortunately, behavioral elimination disorders in cats can be difficult and frustrating to treat.

Preventing Inappropriate Urination
Since it is so difficult to treat, it’s a good idea to try to prevent abnormal urination behavior. A helpful tip is to provide plenty of clean litter boxes, preferably without perfumed litters. The rule of thumb for the number of boxes to have is that there should be at least as many boxes as there are cats and at least as many boxes as there are stories in the house. For single cat households, there should be 2 boxes available. Most cats prefer a large, open litter box in a quiet location as opposed to litter boxes with hoods, which may trap odor.

Male cats should be neutered. Always remember that cats are territorial by nature. Cats housed singularly are less likely to have behavioral elimination problems, probably because they experience less territorial stress.