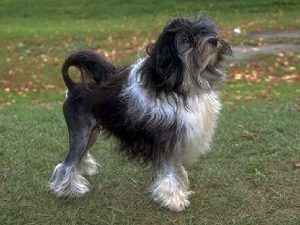 The Löwchen is a member of the Bichon group of dogs that contains the Maltese, Bichon Frise, and Havanese.  The Löwchen has been the cherished and pampered pet of nobility for almost five centuries.  The custom of clipping the dog to look like a little lion is an old one and is found in paintings from the 1500′s.  If a knight did not have the good fortune to die in battle, he was depicted in paintings with one of the little lion dogs at his feet to symbolize his courage and bravery.  The tiny dogs, the darlings of the French court, dropped in popularity at the same time as the nobility.  They are enjoying a renaissance at the present time.  Imported into the United States about 25 years ago, it has gained enough supporters to be accepted into the American Kennel Club (AKC) Miscellaneous class in June of 1995.