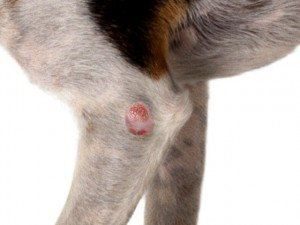 Mast cell tumors constitute about 20% of all skin tumors found on dogs. They occur less frequently on cats. Very occasionally, a mast cell tumor originates viscerally, or in the internal organs. In any case, these are malignancies that should be treated aggressively to prevent metastasis, or spreading to other parts of the body. Mast cell tumors can mimic other types of growths, benign and malignant; any new lump or bump, no matter how innocent looking, should be checked to rule out mast cell composition.

Normal mast cells are non-circulatory, tissue-bound white blood cells that are involved in the body’s defensive response to allergens, parasites, and tissue trauma. They contain in their cytoplasm, large granules that release histamine and heparin. They are predominantly found in the skin, digestive tract, lungs, and mucous membranes of the mouth, nose, and eyes – any area that is an entry point for invaders. Mast cells play an important role in the immune system.

In any type of neoplasia (tumor), an abnormal mutation of a cell evades detection by the body’s anti-cancer mechanisms and begins rapidly dividing. There are known carcinogens that cause these mutations; however, the exact cause of a particular tumor is rarely known. This is most often the case with mast cell tumors in dogs and cats.

Cutaneous mast cell tumors, those that occur in the skin, are generally easy to diagnose. Although their gross appearance can be deceiving, resembling benign masses like fatty tumors (lipomas) and warts (papillomas), their microscopic features are distinct. A simple, relatively painless, fine-needle aspirate (FNA) will usually be adequate to reveal large numbers of mast cells under the microscope. Mast cell tumors exfoliate well; in other words, it is easy to extract representative cells from these masses in order to identify them. These cells are easy to recognize because of their large, dark staining granules.

While an FNA may be performed to determine whether a mass contains mast cells and should be removed, it is not a reliable method to grade or stage the tumor. Nor can it determine whether the mass was completely excised during surgery. Histopathology (tissue analysis by a pathologist) is a very important tool to help predict the prognosis – the likelihood of local recurrence or tumor spread. The tissue must be preserved in formalin and delivered to a pathologist for this type of laboratory testing.

There are three grades that categorize the tumor’s expected behavior after surgery. Grade I being least likely to metastasize (spread to other parts of the body), surgery is usually curative if the tumor was excised completely. This type accounts for about 50% of all canine mast cell tumors. Grade I mast cell tumors may recur locally if surgery left very narrow margins or malignant cells extend to the edge of the tissue. Grade III tumors are very aggressive, on the other hand, and are much more likely to metastasize or already have done so before surgery. Grade II tumors can be unpredictable. A consultation with an Oncologist, a cancer specialist, is highly recommended if the histopathology report returns with a grade II or grade III mast cell tumor.

Staging a tumor determines the extent to which the tumor has spread and whether metastasis has already occurred to adjacent, regional, or distant tissues. Mast cell tumors are assigned a stage 0 through IV based on a standardized system. Stage 0 means that the tumor is confined to the skin, but was not completely excised. Stage I means the tumor is confined to the skin and there is no spread to lymph nodes; whereas, stage II involves the regional lymph nodes. Stage III is assigned when there are multiple tumors or a deeply invasive tumor, and stage IV denotes metastasis to distant body tissues like the liver or lungs.

Staging the mast cell tumor helps predict how it will behave after surgery and whether further therapy is recommended. Chemo- and radiation therapies can greatly extend lifespan when surgery alone is not curative. *(The recent approval of the oral medication Palladia (toceranib phosphate) by the FDA to be released in 2010 specifically for the treatment of canine type grade II or grade III recurrent cutaneous MCTs is another advancement in the treatment of this type of cancer.)

The location of the mast cell tumor on the body can also help predict its degree of malignancy. Tumors that form on the face and extremities tend to be more aggressive than those discovered on the torso. Mast cell tumors of the internal organs carry a poor prognosis despite treatment.

Surgery to remove a cutaneous mast cell tumor is performed under a general anesthetic in most cases. Because mast cells produce and contain histamine, an H1 blocker or antihistamine drug, such as diphenhydramine (Benadryl) is given pre-operatively to patients with large tumors with significant blood supply. Allergic reactions (anaphylaxis) due to huge amounts of histamine release can cause substantial risk to anesthetized patients.

Although mast cell tumors carry the potential to be very malignant, it should be remembered that the majority of this type of tumor found as skin masses on dogs can be cured by surgical removal when detected early in their progression. A good prognosis depends heavily on early diagnosis and treatment.