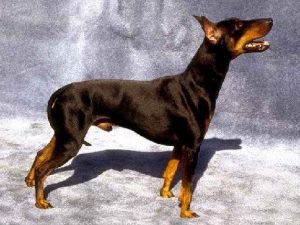 There are two sizes of the Manchester Terrier, the Standard and the Toy.  Both spring from the same stock, one of the oldest strains of British terrier.  In the Manchester district of England, the breed was developed for the poor-man’s sports of rat killing and rabbit coursing.  Judicious crossings of the now extinct Black and Tan Terrier and Whippets gave the Manchester what was wanted in a rat and rabbit dog—the fire and courage of the terrier, and the speed of the little greyhounds.  In 1923, the American Kennel Club (AKC) adopted the name of Manchester Terrier.  Until 1959 the Toy and the Standard were registered as two separate breeds, although interbreeding between the two breeds was permitted.  Since that date, they have been registered as a single breed with two varieties.  A single litter may have both varieties—those under 12 pounds being shown as Toys, and those over 12 pounds being shows as Standards.