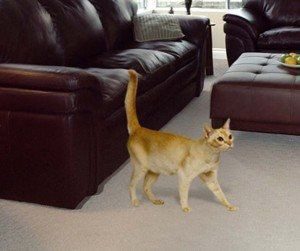 Cats are territorial animals that mark their areas and possessions as a signal of ownership. They use scent glands on their cheeks and feet, as well as depositing small amounts of urine, to leave long-lasting messages to other cats of their presence. When a cat rubs his face against your leg, he is actually marking you as his possession. Humans are not aware of the trace odors that this behavior leaves behind. Spraying urine on the other hand, leaves a very recognizable disgusting odor that we do not want in our houses. Urine marking begins at sexual maturity in males and females, and if not prevented before it starts, can become a frustrating problem to deal with.

Both male and female cats are capable of urine spraying. It is unlike normal urination, in that the urine is forcibly deposited onto vertical surfaces. The cat will raise and shake its tail and spray urine onto a wall, furniture, or even a television at about nose height. Intact (un-neutered) male cats are the most likely culprits of spraying behavior and leave a distinctive tom-cat odor behind that can last for months. Spaying and neutering cats before sexual maturity (around 6 months old) can prevent about 90% of marking problems.

About 10% of cats will continue marking, or simulated marking where no urine is sprayed, despite spaying and neutering. This commonly occurs during territorial disputes in multi-cat households, or when a spraying tom-cat marks outside the cat’s home. Cats may increase marking behavior during times of stress, or when a new pet – cat or dog – is introduced into the household. Besides spraying urine, a cat may rarely deposit stool during marking behavior.

Marking should be differentiated from other very common inappropriate elimination problems in cats. Urinating just outside of the litter pan can be a symptom of Feline Idiopathic Lower Urinary Tract Disease (FLUTD). If urine is found on the floor, or if no typical marking behavior is noticed, a urinalysis should be performed to rule out bladder and kidney stones or infections.

If the problem is indeed marking behavior, intact cats should be neutered or spayed. It may take weeks for hormone levels to subside and spraying to cease. Once spraying has begun, it can be very difficult to stop.

Changes in the cat’s environment such as new additions to the household including pets and people, and outdoor cat encounters, must be considered when a cat suddenly begins marking. The cat may need to be isolated in a separate room for a period of time until it can become acclimated to the changes. Occasionally, anti-anxiety medications can be used to help reduce stress in a persistent marker. All other forms of urinary tract disease must be ruled out before beginning any behavioral drug therapy.

If the problem arises from outdoor cats marking the house and yard, strategies to remove them need to be pursued. Closing curtains where indoor cats may observe the unwelcome intruders may help. Enzymatic odor neutralizers may help if it is possible to locate the source of the urine. They should also be used in the home where an indoor cat has sprayed in the past.

Even if the odors have been removed inside the house, a cat may continue spraying unless the cause is addressed. It may sometimes help curb spraying behavior by confining a cat to a very small room with only its own belongings. Cats are not likely to mark food bowls, litter pans, and personal bedding or toys.