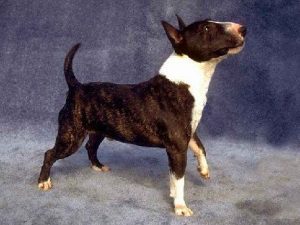 Bull Terriers were developed in 19th century England for a specific purpose—fighting.  It was created by crossing the Bulldog and various terriers, especially the now extinct White English Terrier.  What resulted was an agile, courageous dog that would stand up to anything.  The original cross was a small dog much like the present day Miniature Bull Terrier.  By adding Pointer blood, the size of the dogs was increased.  Dogs were often pitted by weight and there was a group of fanciers that cultivated the miniature size.  After blood sports were outlawed, the breed fell into disfavor.  Recently breeders have been actively trying to improve the heads of the miniature variety, which were not as refined as the larger ones.  They seem to have succeeded.  Miniature Bull Terriers were granted membership in the American Kennel Club (AKC) in 1992.