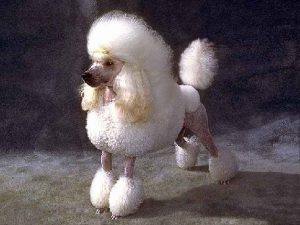 The Poodle originated in Germany as a water retriever.  Pudel means water in German.  Today there are three sizes: toy, miniature and standard.  All sizes are judged by the same standard of perfection and are identical in every respect except height and weight.  The miniature, middle of the three varieties, is a miniaturized version of the Standard.  It is thought that the Miniature Poodle was not used for sporting purposes.  It was, instead, the pampered darling of the French nobility.  Some were used as truffle hunters because of their trainability and good noses.  They have gained renown as performers in the circus ring.  Today, the Miniature version is the most popular of the Poodles.  It is one of the most popular dogs in the whole world.